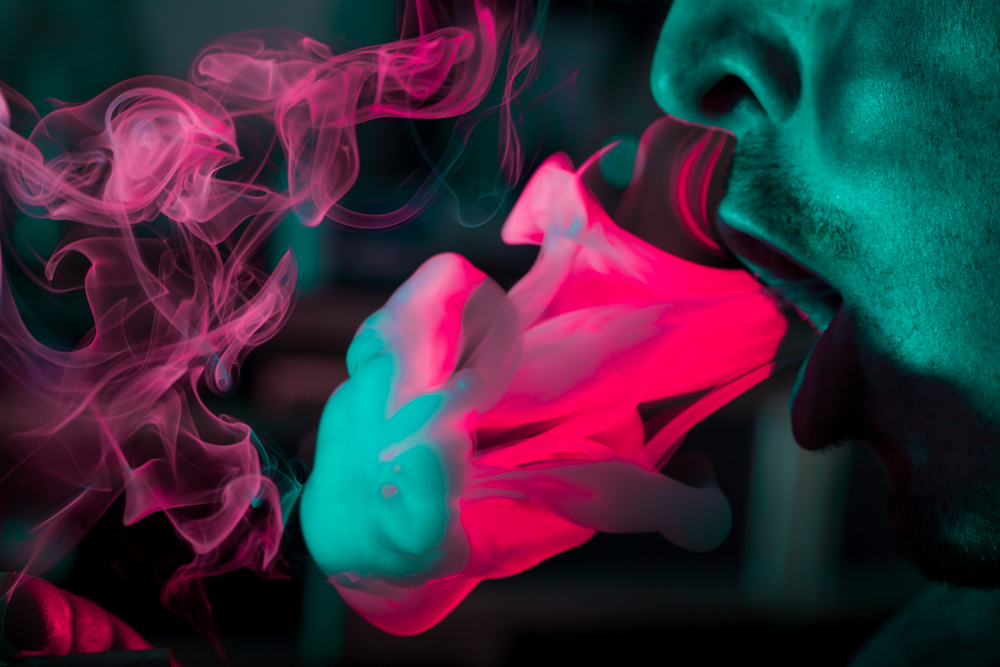 How Does Marijuana Use Affect Your Smile?

As of 2019, 30 states have legalized marijuana in some form, including recreational and medical use. As you might imagine, this trend has caused the popularity of marijuana to skyrocket, as it has brought in millions in revenue for states that have chosen to legalize it.

With this upsurge in popularity, more questions about the drug arise. While it’s widely accepted that marijuana in all forms is safer than using tobacco, the question remains of how harmful it is for the oral health of its users. To get to the root of this question, it’s first necessary to understand how marijuana is consumed.

The Various Forms of Marijuana

While the most common way people consume marijuana is by smoking the plant directly in rolled papers or a pipe, edibles and electronic cigarettes offer an opportunity to experience the effects in different ways. Each of these methods comes with their own advantages and disadvantages when it comes to how they affect your teeth.

The traditional and most common way marijuana is consumed is by adding pieces of the ground up plant to a paper roll, bong, or pipe and smoking it.

The advent of e-cigarettes also became popular for those who want to smoke their marijuana through vapors. This method has the advantage of avoiding the harsh smell left behind by smoking the herb, and it’s extremely portable and nonchalant.

For those who don’t like to subject their throat to smoke, marijuana is also found in a massive variety of edible products, ranging from pizza and ice cream to gummies and chocolate bars. Like the other methods, there are advantages and disadvantages to your teeth for indulging in edibles.

Each Method Has a Different Effect on Your Oral Health 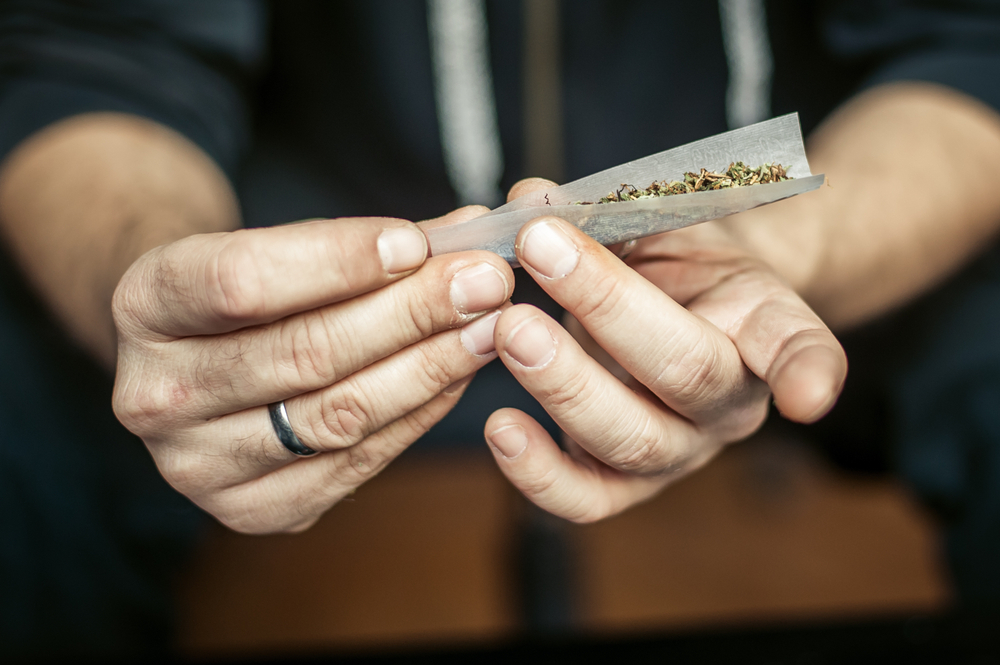 A man rolls marijuana into a paper.

No matter how you choose to consume your marijuana, each of the three methods has some effect on your smile. Discover why much of the impact on your oral health has to do with the way you choose to use it.

How Does Smoking Marijuana Affect Your Teeth?

About 37 million Americans currently use marijuana on a regular basis, and of those, the vast majority smoke the plant by rolling it up in papers or putting it into their pipe. The main problem that results from smoking marijuana is the notorious dry mouth effect which leaves your mouth defenseless. Saliva acts as a natural cleaner of your teeth and plays a role in keeping your mouth fresh. Without it, there’s an increased risk of gum disease, tooth decay, and other conditions.

How Does Vaping Marijuana Affect Your Teeth?

Vaping has become a popular alternative to traditional methods of smoking. Whether you’re vaping tobacco or marijuana, the effect on your smile will be largely the same. Due to hot vapors being expelled from the vaporizer, there is a severe dry mouth effect that takes place. As mentioned, this renders your mouth vulnerable to plaque and other dental problems.

A study from 2018 showed that vaping causes inflammation in your mouth and can kill healthy cells. This also results in damage to the user’s DNA and can lead to a number of different dental problems such as tooth loss and bad breath.

How Can Edibles Impact Your Smile?

Ironically, the effect that edibles have on your smile has nothing to do with the marijuana that’s infused in them. Most edibles are filled with extra sugar to make the product as appetizing as possible and to cover up the bitter taste of the cannabis. While the chocolate bars and brownies may seem like a fun alternative to smoking, it’s important to realize that the sugar content of these snacks makes them far more than just a vehicle for your marijuana dose. 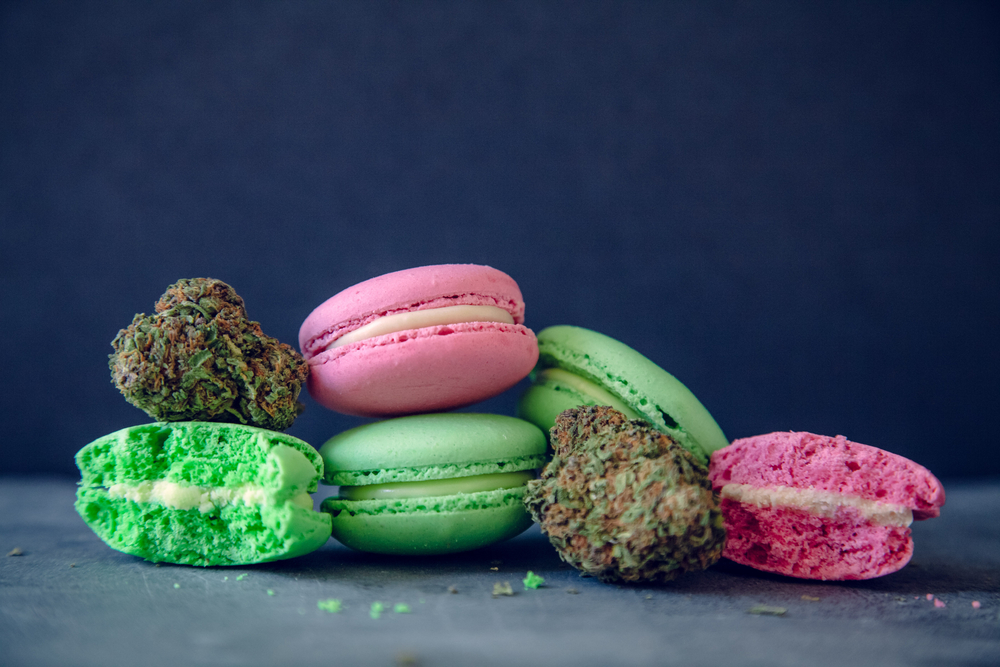 Edible marijuana products come in many forms, but cookies and brownies are most common.

While marijuana may pose certain risks to a healthy smile, how does it impact situations like missing teeth or sleep apnea? Learn about some interesting ways that marijuana relates to common dental conditions in both positive and negative ways.

Dr. Darlene Hart confirms that stress plays a major role in both dental and sleep problems.

While marijuana alone may not be the best plan for a stress-free life, there’s no doubt that it can contribute to a lower rate of stress when used in moderation.

Whether marijuana was the cause of your missing teeth or not, it’s vital to have them fixed as soon as you possibly can. The biggest problem marijuana causes is dry mouth, and if you fail to drink water and maintain excellent oral care habits at home, it can eventually cost you your teeth.

Replacing Your Teeth With Dental Implants

When you’re missing one or more teeth, it’s only a matter of time before remaining teeth begin to crowd together, causing far worse dental problems. Of the three main restorative treatments, dental implants are by far the best option. Not only do they resemble natural-looking teeth, but their durability and ease of use are unparalleled. To find out if this remarkable treatment is right for you, schedule a consultation with a dentist who provides implants, like Dr. Sofia Napolitano from Staten Island, NY.

Towards the end of 2017, the Minnesota Department of Health added obstructive sleep apnea (OSA) to their list of conditions that are treatable with medical cannabis. However, it was removed a short time later due to insufficient evidence that it helps fight the disorder.

No matter if marijuana emerges as a proven treatment for sleep apnea, the disorder can be devastating and it’s recommended that those who snore frequently and loudly are properly tested and treated. Taking control of your sleep apnea is a matter of finding a sleep specialist like Dr. Kellye Rice of Brentwood, TN. Once you’ve been diagnosed, oral appliances can be used to restore your ability to rest throughout the night.

While significantly safer than cigarettes and tobacco-based products, marijuana isn’t without its health concerns. But by thoroughly understanding issues such as dry mouth and inflammation, we can take precautions to mitigate their damage, ensuring that it doesn’t affect our oral health. While mainstream marijuana is the new norm, the problems that potentially come with it don’t have to be, as long as you’re aware and prepared for them.